Over the past little while, there have been things I've forgotten to say or include in posts. Frequently, this has to do with getting interrupted while I'm writing and losing whatever I was thinking about. Probably, most of these things were of no great import, but, sometimes, they are.

One of the things I forgot was supposed to go into my A to Z posts. When my wife brought this to my attention, I was already past where it would have logically fit within the letters, so I had planned to work it in at another spot. But I forgot. And, then, I was going to work it in at the end, but I forgot. And, then, I was going to put it into my reflections post, but I saw that article about the bionic eyes and got all excited about that, and, guess what, I forgot. This is why when I go to the grocery store only needing three things, I come back with only two of them. Actually, often that's because of the "Can I haves" from my daughter. Having to say "no" 30 times during a 15 minute trip into the store can make you forget anything.

Every year at Christmas, we watch Scrooged. That may be my wife's favorite movie. I'm sure that's not what she would say, but we've seen that more than anything else my wife would claim as her favorite, so I'm just declaring it her favorite. So! My wife's favorite movie is Scrooged, and we watch that every year at Christmas. [Aren't you glad we got that all cleared up? Boy, I am!]

In the movie there's this bit where the out-of-touch president of the TV station is telling Bill Murray's character that they need to have television for cats and dogs. They also need to work things into regular programming to get those same cats and dogs hooked on TV. You know, like a detective show where the cop dangles a piece of string as his "thing." This whole thing, to put into a modern perspective, is meant to show how ludicrous and absurd the 1% can be with their time and money. This guy was into cats, so he wanted television for his cats, and, since he owned the TV station, he was gonna make that happen. No matter how stupid the idea.

And, see, that's the thing: it is a stupid idea.

It's a stupid idea that has, now, become a reality. I give you DogTV! Seriously. I don't care how much science has been put into it, and they claim there has been a lot of science put into it, it's insane. I mean, I love my dog (you remember her, right?), 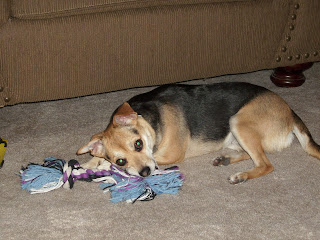 I even let her lick my face (was that too much?), but she's a dog! Dogs are supposed to lick faces. They are not supposed to watch TV. If dogs were supposed to watch TV, they would have grown thumbs and invented it for themselves. Heck, we did invent TV, and I don't even think we should be watching it. Which is why we just get static on ours.

Anyway... just another example of fiction being turned into reality. Even if it is a dumb one.

The other big thing I meant to mention is something that leads into something else. Not that it was supposed to, originally, but it's going to now.

I just did a review on A Thread of Grace and, really, Mary Doria Russel in general. Okay, really, it was about The Sparrow, which I'm still looking for so that I can re-read it (and that's a big deal as some of you may have picked up), but I didn't just read that one. The Sparrow, aside from winning a bunch of awards (like the Arthur C. Clarke Award), was Russel's first novel. Yes, it was her first novel. I don't mean first published, just her first.

I'm not saying that that means that a first novel is one's best novel, I'm just saying that, often, the first is the best. Orson Welles knew it. He made Citizen Kane and said everything he did after that would be downhill. He wasn't wrong. In fact, some people have written just the one and stopped. But the one was great. Gone With the Wind. To Kill a Mockingbird (and Harper Lee was somewhat pressured to write more books, but she refused, because she knew she could never surpass the one she did write). And, even though Richard Adams has continued to write, he's never done anything better than Watership Down.

Don't listen to agents. Don't listen to publishers. Don't listen to your crit partners. Only you know the story you want to write. No one else, just you. You work on it, mold it, smash it, cut it, build it, believe in it, until you, only you, after having read it 20 times or 45 times or however many times that you've read it until you're sick of it, can read it and say, "Hey, I like this. This is good. I would read this." When you have something that you would read, that you would flip through at the bookstore and think, "hey, this sounds interesting," that you would pick up and buy, well... don't worry about the rest.

You want to know a secret? Agents don't know. Publishers don't even know. Heck, the public doesn't even know. You just do the best you can. You figure out what you want, what you need, from writing, and you work toward that. Sure, I know for a lot of you that means the validation of being traditionally published, so that means working with agents and publishers and jumping through hoops and all of that, but like I said way back in this post, you have to figure out what you want. If what you want doesn't require traditional publishing, then don't go that route (really, go back and read that post (you can even still comment on it, if you want to) if you want the full discussion).

>steps off of soapbox< (who put that there, anyway?)

Personally, I like my first novel, The House on the Corner (which I reviewed here). It's good. I've read it... many times, now, and I still enjoy it (and I had a whole class of 6th graders (and the teacher) laughing during chapter 19 this morning). But it's not The Sparrow, or Neormancer, or Citizen Kane (although it has been compared with The Sorcerer's Stone by more than one person), and I hope I get better. In fact, I plan to.

I suppose what all of this boils down to is this:
Believe in yourself.
Not in any New Age way or belief that believing in yourself will bring you everything you could hope for. It won't. Don't let anyone fool you. However, believing in yourself, that you can do it, is the only way that you will keep working at it. No one else can give that to you, but plenty of people can take it away. If you let them. So don't. Believe in yourself, believe that you can make it happen, work to make that come true.
Posted by Andrew Leon at 1:09 PM

Email ThisBlogThis!Share to TwitterShare to FacebookShare to Pinterest
Labels: A Thread of Grace, Citizen Kane, dogtv, fiction, Gone with the Wind, House on the Corner, Mary Doria Russel, Neuromancer, Orson Welles, reality, Scooged, Sparrow, To Kill a Mockingbird, Watership Down