Ghost Rider: Spirit of Being in the Wrong Movie

Ghost Rider has never been one of my favorite Marvel characters; although, I do like him. He's just not one of my favorites. However, I did love the series that started up in 1990, and you have to admit that he just looks cool. 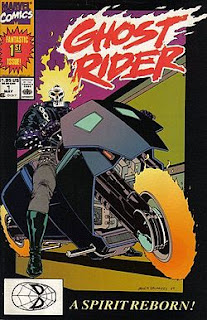 That was easily one of the best comic series on the market at that time and still stands out as one of the best runs ever. Well, at least for the first 25 issues or so. It turned out to be the series that almost caused Marvel Comics to cease to exist, but that's a story for another time.
Wait, wait! Here's another one: 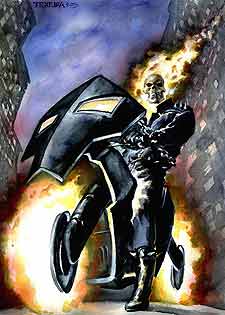 Maybe it was really just about the amazing art of Mark Texeira. Okay, no, it wasn't, because I'm a story guy, but his art certainly didn't hurt anything and really set the mood of the comic.

It's not surprising that Marvel licensed the character out to be made into a movie. I thought the first movie was pretty good, despite what people say about it. They did a pretty decent job of melding the classic 70s Ghost Rider with the modern 90s Ghost Rider. It wasn't a great movie, but it was pretty decent.

I just saw the new one, Ghost Rider: Spirit of Vengeance, and, I have to say, I have no idea what that was. It acted like a sequel, but it twisted up enough of facts from the first movie to be unrelated to it. It sounds like they want it to be a reboot, too, so that's just messed up. Really, what the movie did was give Nic Cage a chance to act crazy. Which he's really good at, but it just didn't fit in this movie, because it's not the character he established in the first movie. The movie tries really hard, and it almost succeeds (it does have some pretty cool visuals (but the cackling/crackling whenever GR is around is dumb)), but, in the end, it just falls flat on its face. Like, at one point in the movie, GR is blown up with a grenade and Blaze ends up in the hospital because of it, but a little while later, he takes multiple blasts from missiles without slowing down.

It's disappointing, because I always want Marvel movies to succeed (because I'm still just a Marvel kid at heart). But Marvel isn't doing well with this whole Marvel Knights line of movies and is now 0 for 2 (the other being Punisher: War Zone (another sequel/reboot)).

The worst thing about the movie is that the movie was not about Ghost Rider. This is a problem. It seems that when they decided to do the second movie, they wanted to go with a story that fit "very much in the zeitgeist, like Da Vinci Code." So what they wrote was another story about the devil trying to have a half human kid that will be the anti-Christ. Because, you know, that's in the Bible. That the anti-Christ is the son of Satan. Except that it's not. But maybe people think it's a good balance since Christ is the Son of God? At any rate, they wrote this story about how the devil is trying to become the anti-Christ, the same cliche' story you've already seen in dozens of movies, and through Ghost Rider into it to stop him. But the story is never really about Johnny Blaze or about Ghost Rider, so it never feels right.

Have you ever had that experience?

My first real experience of this was with Tim Burton's Batman. I just want to say, right now, that I can't stand that movie. Not only did Mr. Burton know nothing about his subject (as Burton says, "I would never read a comic book."), he didn't even want to make a movie about Batman. He wanted to make a movie about the Joker, so the movie just never felt right to me. Sure, it had Batman in it, but it wasn't really Batman's story, and it just didn't work for me.

This is also why I don't read licensed books. I loved the Dragonlance Chronicles when that came out back in the 80s. I loved Dragonlance Legends, too, but that was still Hickman and Weis. Later, they started letting other people write books set in that world and stories with the characters from the books, and I just couldn't get into them. They never felt right. Like... like I want to tell this story, but I want to use those characters even though they don't really fit what I'm doing. So, even though I tried to read some of the other Dragonlance stuff that came out, I never liked any of it and just quit trying.

The same thing happened with Star Wars. I read a few of the first Star Wars novels that came out when I was a kid: Han Solo at Star's End and the rest of that trilogy, Splinter of the Mind's Eye, and I liked them well enough, but books taking place in the expanded Star Wars universe didn't really hit it big until the 90s when Timothy Zahn wrote Heir to the Empire. What a great book. Zahn nailed it. Often, I would feel just like I was watching the movies while I read his books. However, when I went on to other Star Wars books, which exploded after Zahn's Thrawn trilogy, I was sorely disappointed. Most frequently, the characters just didn't fit the stories. The writers were doing things with the characters that just weren't in character for them in order to meet the needs of their story.

Which brings us to the point. Yeah, yeah, I know... that was a lot to go through to arrive at some point other than what it looked like I started with, but, really, it's all the same thing. See, I went to see this Ghost Rider movie and kept wondering why Ghost Rider was in the movie. He just didn't belong. The movie was about this kid, Danny, not about Ghost Rider. In that, they spoiled both things: they spoiled Ghost Rider, and they spoiled the movie about the kid. Why? Because they didn't know what to do with the character they had.

I'm not sure, but I think this may be the biggest issue that writers have. This issue of making a character do something that the character wouldn't do in order to further the story. More often than anything else, it's the thing that will ruin a book/movie/TV show/whatever for me. When I stop and think, "Why? Why did that character just do that? That's not what that character would do," the writer has failed. Like Alfred bringing Vicki Vale down into the Batcave or Batman taking off his mask in front of the Penguin. Or Ghost Rider being in eastern Europe with the flimsy reasoning "God has brought you here."

Writing is always about character vs plot, I suppose. I tend to be more plot driven myself, so I understand the temptation to bend your character to your will in order to meet a need in the plot, but you just can't do that. To give this a color metaphor, if you've painted your character red and blue, you can't have him do something green. If you need him to do something green, go back and repaint him red, blue, and green. It's probably better that way anyway. The more colors you use, the more depth the character has.


And now for some notes (LOOK! I actually remembered to put them IN the post!):

Note #1:
Last week, I won a copy of Rusty Webb's  "A Dead God's Wrath" playing in Briane Pagel's amazing Star Wars Blogathon. I already own a copy of this great little book, and you should own a copy, too. In fact, if you go over and sign up for the blogathon (just follow the link), mention that I sent you, I'll donate my copy to the first person that does. You'll also get 50 points just for signing up! It's a no lose scenario.

Note #2:
Speaking of Pagel's blogathon, a copy of my very own book, The House on the Corner, is this week's prize. The great thing? All you have to do is comment to be eligible to win. You don't have to be first, you don't have to be correct. Everyone that comments is entered into the weekly drawing. And you'll get 50 points if you mention my name! What a deal. And Briane believes that everyone should read my book, so go sign up for a chance to win your very own e-copy!