Nostalgia vs the Transformers (pt 1)

I love the Transformers. I always have. Well, I have since they first came out in 1984. Just the concept of them. I started collecting the toys, right away. Maybe it was just good timing. Star Wars toys were on the way out since the original trilogy was over, and there were Transformers to take their place. Transformers were also responsible for me delving back into the world of comic books, but that's a story for another time. It's not that I loved the comic book series or that I loved the cartoon or even that I loved the toys, I loved  the idea of them. They were just so... cool.

During high school, I had a babysitting job every day after school. It was good money. And, although I was forced to sit through He-Man, I got to watch the Transformers cartoon with the younger of the brothers pretty much of every day. That was great until they made that horrible animated movie in '86 where they jumped forward in time and killed off virtually all of the existing characters. The cartoon series, after the movie, picked up where the movie left off. I hated that movie. It sort of killed everything about the Transformers. I think, really, it was the jump into the future that did it, although killing off all the characters everyone was familiar with couldn't have helped. Well before the end of high school, I had lost interest in the Transformers as a distinct franchise.

Jump forward a bunch of years and my middle child fell in love with Transformers, also. They were his absolute favoritest thing in the whole world for years. Until he discovered Legos. I mean really discovered Legos when they launched the Bionicles. At any rate, I fell in love with the Transformers all over again, albeit vicariously, through my younger boy. It was just so fun to watch him enjoying  them so much.

The boys and I were very excited when Transformers was launched as a movie franchise. In fact, this year, Transformers: Dark of the Moon was the only movie my younger son said he absolutely could not miss. He was willing to sacrifice getting to see anything else in order to see Transformers 3. Well, except, maybe, Cars 2, but he already knew we planned to see that as a family, so he didn't have to choose between the two. Not that he didn't get to see other things, but, if it had come down to it, since we can't take the family to see every movie we'd like to see, that was his pick on what he needed to see this summer.

Nostalgia is a funny thing. Even kids experience it. I remember this one episode of Leave It To Beaver in which a friend of his who had long ago moved away was returning for a visit. There was much anticipation. They planned to do all the things they had so loved doing when they had been younger. He finally arrived, and they went out and did all of those things. At the end of the day, though, they were left sitting on a curb or something in complete disappointment. None of those things had been fun anymore. But the thought of them... the remembrance of them had filled both boys with such wistfulness and enthusiasm.

I think it's nostalgia that's at the heart of the success of the Transformers movies. Especially considering how much they've been slammed by movie critics. The thing with the Transformers is that there isn't just one iteration. Every few years, the entire scope and story gets changed. Within that, though, excluding the aforementioned animated movie in '86, there are two characters that are always at the heart of the show: Optimus Prime and Megatron.  The conflict between these two characters is the driving force behind every Transformers story arc. Sure, there are a few other characters that have been around a while and are frequently included (Bumblebee, Starscream, Iron Hide), but it always revolves around Optimus and Megatron.

With Transformers, Bay evoked just the correct amount of nostalgia while still delivering a new story. It kept those of us that had had some phase of loving Transformers when we were younger realize that we'd grown out of them. Kept us from sitting down on the curb being disappointed. I think this is the reason so many of the other nostalgia type movies have failed; they tried, specifically, to reproduce the original. We all sat down and said, "Wow, that wasn't as good as I remember it being." But Bay didn't do that. He took the core and gave us something new, and all we could say was "Wow!" After Transformers came out back in 2007, my brother actually called me to tell me it was the best movie he'd ever seen. This surprised me because 1. my brother had never really been into the Transformers when we were kids and 2. he said it was the best movie he'd ever seen. I mean, I really enjoyed Transformers; it was probably in my top 5 for 2007 (maybe top 3), but hardly the best movie ever... anyway. The point is is that for my brother, and, I'm guessing, a lot of other people that just had a passing acquaintance with Transformers at some point in their childhood, the movie brought back everything that was important to them: giant robots that could change into vehicles fighting with each other and, specifically, the conflict between Megatron and Optimus Prime. It delivered that "Wow!" moment of it being just like what they remembered as a kid while, actually, being totally different. Making a movie that can do that is pretty genius. [I'm just waiting to see how my brother reacts to The Smurfs, because he loved the Smurfs. Don't tell him I said that.]

Despite the fact that people said they didn't like Transformers: Revenge of the Fallen as much and critics bashed it as the worst movie ever, it must have done its job as well. It outperformed the initial movie both domestically and internationally, so people went to see it no matter what was said about the movie. Maybe it was Devastator. Dark of the Moon, although it hasn't passed the domestic gross (yet) of Revenge of the Fallen, is already the highest grossing of the three films. As a prelude to part 2 of this piece, which will be my review of Dark of the Moon, I will say that I thoroughly enjoyed it, and the 3D was amazing.

On the topic of nostalgia, I think this is where there is a failing, if there is a failing, with the Star Wars prequels. People wanted their sense of nostalgia invoked when The Phantom Menace came out. However, Lucas wasn't going for that. The prequels weren't about delivering movies that would take us back to that same experience of watching Star Wars as when we were kids. And that was good with me. Star Wars never fell into the realm of the nostalgic for me, so I was ready for the new story when it came. Most people, I think, just wanted that feeling of seeing Star Wars they had when they were 10. What they ended up with was sitting on the curb with the Beaver saying, "That wasn't what I remembered." Of course, with the prequels, it wasn't supposed to be. I think if people could just come to grips with that, they would be able to get over their issues with the movie. Maybe even Jar Jar. Like I said, "Nostalgia is a funny thing."

As an added bonus, here are some shots of some of my favorite Transformers from when I was a kid: 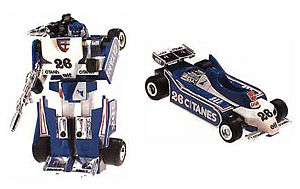 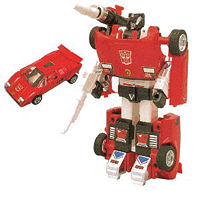 Shockwave (my favorite cover from the comics series) 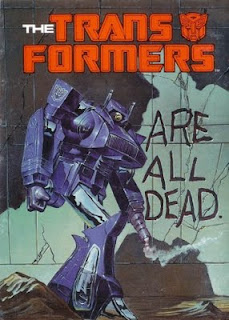