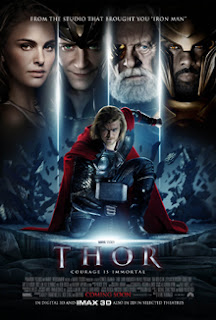 I believe Thor may have been the first of the MCU movies I reviewed on here, back when my movie reviews were less movie reviews and more... I don't know. Commentary on experiences? You can go back and read it here if you're so inclined. It seems even then that I had some kind of beef against the Hulk movies.

Of the trio of Avengers origin stories, I think Thor is the weakest. I say this based purely on the fact that both Iron Man and Captain America present origins that are very close to their comic book origins. Thor, however, diverges from his. I am much more easy with that, now, than I was a decade ago. Thor's actual comic book origin is too... I think it's a bit of a wish fulfilment. Too Arthurian. But I'm not going to get into that right now. [But I think it must be related to how many Boomers I've known for whom Thor was... not just their favorite super hero, their only super hero: "Do you read comics?" "No, but I read Thor." It's fucking weird, man.] The movie origin is... I'll just say it: better. It makes more sense and certainly fits into the context of the MCU in a way that the comic origin would not have.

I hadn't heard of Chris Hemsworth before this movie, but he was a great choice. I don't know of anyone who would have been a better choice, in fact, so, you know, just pointing out Marvel's excellent casting choices again. And Anthony Hopkins... well, I think there were probably other choices for Odin, other actors who could have done it with just as much... authority?... as Hopkins but, if you can get Hopkins, get Hopkins.

Then there's Tom Hiddleston... You know, he's rather understated in this movie. I don't know if he just hadn't worked himself into the skin of Loki yet or if the writers just hadn't realized his full potential. At any rate, it's a little weird looking back and seeing him so much in the background. But still fully a manipulator. Hiddleston is good in this movie. Maybe very good? Later, he becomes great, and I can't imagine anyone else in the role, now, but, at the time... Look, clearly, he didn't make much of an impression on me when the movie came out. I didn't mention him at all in my original review.

I love that the Warriors Three and Sif have such a big role in the movie. Other than Josh Dallas, as Fandral, the casting is good. Dallas was popular at the time, but that role should have gone to Cary Elwes; I don't care how old he is. I'm not really an Elwes fan; I don't think he's a good actor, but he has particular roles he can play, and this one should have been his.

Also, Kat Dennings is awesome as Darcy. She was certainly a surprise, and I'm glad Marvel has kept her around.

Then there is Natalie Portman... She is my point of ambivalence in this movie. I think she is a really good actress, but... I don't know. There's nothing wrong with her performance, and she has good chemistry with Hemsworth. It's just... her.

As a character in the MCU, Hemsworth as Thor is one of my favorites. His range is one of the broadest of the various characters, called on to be both goofy and deadly serious. And a wide range in between. Thor was an excellent start to that.