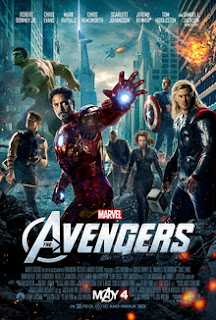 First, I did previously review this movie when it first came out, but I don't actually suggest you go back and re-read it. I didn't say much of substance in the review. I was obviously in the midst of exaltation over the movie and had no real thoughts other than "that was amazing!!! that was fucking amazing!!! that was amazing!!!" I was not wrong. But the review doesn't do more than say that in various ways without offering anything of actual substance other than a very brief mention of Mark Ruffalo.
Let's dig a little deeper this time, shall we?

And let's start by dealing with Joss Whedon since we didn't know back in 2012 that Joss Whedon is an asshole and maybe a bit of a racist. It doesn't change the fact that The Avengers is probably the best work he's ever done, but it sure does put a bitter taste in my mouth that it had to be him. But it's an amazing script, especially the dialogue, and he is the sole credited screen writer, so...  yeah. But I can't help but wonder how he would have treated Chadwick Boseman if Black Panther had already been introduced.

We also need to talk about Scarlett Johansson. Johansson shone in this movie and, now, I want this Black Widow back. The spy Black Widow, which I think everyone has forgotten about. Remember, that's how she is introduced in Iron Man 2, as a SHIELD plant to keep an eye on Tony. Her opening scene in Avengers is one of the best in all of the movies, her interrogation scene. Not to mention her later interrogation of Loki. This Black Widow is an extremely interesting character, and I'm bummed that Marvel didn't take the leap with a solo movie for her back when they could have done a spy movie. It's one of the genres they haven't delved into yet.

Speaking of Loki, Tom Hiddleston is fantastic in this movie. Which, actually, highlights that he was also fantastic in Thor. The change in the character is... so satisfying. From sullen prince just trying to stir up mischief to the true God of Mischief. If you had asked me way back when, after I saw Thor for the first time, if I thought Hiddleston was capable of playing Loki as he is in Avengers, I probably would have said no. He really embraces the role, and, really, I can't imagine anyone else as Loki at this point.

Then there is the aforementioned Mark Ruffalo. He is a delight as the Hulk, which may be an odd word to use to describe Hulk, but it's true. I never would have thought finding someone to play Bruce Banner would be so difficult, but it turns out Hulk was almost as difficult to cast as Batman. (And DC is never going to succeed there until Warner Bros gets its head out of its ass and figures out how to make super hero movies.)  Ruffalo succeeds where Norton failed in that he plays Banner as someone you could never conceive as someone with a rage monster inside, much like Bill Bixby back in the 70s. He's terrific, and it's so good that Marvel let Norton walk away in his Hulk-like fit of rage.

Really, there's so much more that could be talked about from Avengers, but I probably would never stop. Things worth mentioning, if only in passing: the classic superhero brawl when the heroes first meet, the introduction of the SHIELD council, Loki being the threat the heroes come together to defeat (as in Avengers #1). It is, in many ways, a perfect movie. I had forgotten how much I loved it, so I am really glad to have re-watched it.

In fact, it creates a conflict for me in my MCU rankings, because I think Avengers has to go to #1. It lacks the warmth and touching moments that Captain America has, but I can't think of anything negative to say about Avengers, and Captain America does have that GI Joe moment and, well, Hugo Weaving did not make the Red Skull the villain that Hiddleston makes Loki. So...

The new MCU rankings!
1. The Avengers
2. Captain America: The First Avenger
3. Iron Man
4. Thor
5. Iron Man 2
6. Incredible Hulk (this drop through the rankings is rather like Hulks drop from the helicarrier)