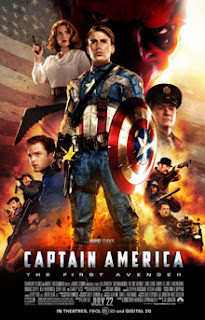 Sometimes, things don't change and, looking back at my review of Captain America back when it first came out, I can see that my opinion hasn't changed much. Actually, my opinion on how strong a movie Captain America: The First Avenger is has only gotten stronger. I don't know what that means, yet, in a practical sense, because it's still in the top three best Marvel origin story movies. I will need to re-watch Spider-Man again to see if it has ousted Spidey as my favorite. I don't know, the top three -- Captain America, Spider-Man, and Iron Man -- are all so great, capturing the essence of the characters and putting them in a modern context, it's hard to see which is better, but I'm certain, as far as personal feelings go, that Cap has bumped Iron Man to at least the #2 spot.

So let's talk about Chris Evans. I don't think there exists a better choice for Steve Rogers than Chris Evans. I could be wrong about that, but I don't think so. I talk about Marvel's ability to cast their characters a lot, probably too much, but this choice is probably the most perfect choice they made. The character of Steve Rogers would have been diminished by any other actor. It's even more impressive considering that Evans had already been Johnny Storm in Fox's failed FF movies. Like Harrison Ford getting the role of Indiana Jones after being Han Solo, because Lucas did not want him (not because he didn't think he was right for the role, obviously, but because he didn't want to just keep using Ford over and over again (it's about barriers, man)). Now, I'm not saying that Evans himself could live up to the character of Captain America -- after all, I don't know him -- but he seems like a pretty good guy. And he likes dogs. And he was in Scott Pilgrim vs. the World.

Which leads me to Stanley Tucci... I think the relationship between Rogers and Erskine is the foundation the whole movie rests on, and it is played so perfectly by both of them. The few scenes between the two of them are so touching and heartfelt. Tucci is wonderful. Again, the movie would have been diminished with anyone else in that role.

I was less impressed this time with Hugo Weaving. It's clear why he got the part, and he plays the role as an Elrond variation of Agent Smith. He's fine. There's nothing wrong with his performance; I just don't think he... really put anything into it. What I'm saying is that Weaving did not make this a role that would have suffered if they had put someone else in it.

On the other hand, Tommy Lee Jones is perfect in his role as Colonel Phillips because he is Tommy Lee Jones. Anyone else would have been trying to play Tommy Lee Jones as Phillips, so it's great they were able to get Jones to play himself. You can't beat that.

I like Hayley Atwell and the character of Agent Carter. I think Atwell is better here than in her TV show, but I think Carter is better in the TV show. If you don't understand what I'm saying, I can't explain it. Dominic Cooper and Stark are both better in the TV show, not that Cooper is bad here; there's just not a lot for him to do.

I still love the Howling Commandos, especially Neal McDonough. It's his weird, freaky smile; what can I say? But it works great with Dum Dum's huge moustache. I wish, kind of, that they would do a Howling Commando movie or TV show. Clearly, that group of guys was tight before Cap came along, so it would be a lot of fun to see what kind of mischief they had before Captain America.

The big surprise for me on this watching was discovering that Bucky is... kind of a dick. Well, not kind of. I think when the movie first came out, I was taken in by Sebastian Stan's charisma, which is, I suppose, the point, kind of like Tony Stark. You have to be around him awhile before you realize he's a bit of an asshole. Bucky, not Stan. Where, before, I just thought it was amusing how upset he got when Carter won't give him any attention, this time it was, like, wow...! He's really getting pissy about that. So good on Sebastian for pulling that off...?

The one thing I would say is a negative for me on this viewing is that some of the scenes fighting Hydra, especially the escape scene, feel like watching the 80s GI Joe cartoon. Hydra is all in dark colors with face masks and in big dark vehicles, all shooting blue "lasers." I wasn't struck that way by it before but, this time, that scene in particular, with all of the soldiers running around fighting Hydra, made me think of GI Joe. It would not have surprised me at all if someone had yelled "Yo, Joe!" and thrown a fist in the air. It's a small thing overall.

And I wonder if Joe Johnston, the director, did that on purpose or if it was accident or what. I don't know if it matters. I think Johnston has been an underused talent in Hollywood. It's not like he created Boba Fett or anything. Oh, wait, he did. But, maybe, Johnston has worked as much as he has chosen to. I wouldn't know.