This Means War: Where I Am Right Now 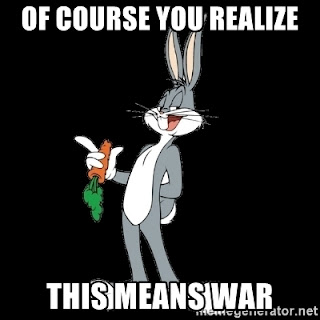 Well... here we are at election day.

And maybe I'm too pessimistic about humans -- although what I have learned in the last four years is that, really, I have not been pessimistic enough -- but I don't think it matters which way the election goes: There's going to be violence.

The most likely scenario is this:
Trump -- already a #fakepresident -- loses the election. His supporters, already primed for violence and on standby, "revolt." They will claim that the election was rigged and try to use force and violence to help Trump reman in office. Will this be an actual civil war? I don't know. It really depends on whether these guys organize or not. It could just be like spot fires that have to be stamped out but, if any state governments get behind this shit, it could be a whole lot worse.

The problem, here, is that I think Democrats are thinking that if Trump (#FAKEPRESIDENT -- yes, I'm saying it again) loses that everything will... just be okay. Everything will go back to "normal" and we can all pretend that the last four years didn't happen.
I don't think it's going to be that way. At all.

The other scenario is that Trump "wins," again losing the popular vote but by an even greater margin. The electoral college again fails to do the job it was created to do and gives the election to Trump. This will be the slow burn war that might result in an actual civil war. Two things will happen:
1. the GOP will pull out all of the stops on their facism
2. liberal will organize

Of course, all of this will be complicated -- or maybe simplified -- by what happens in Congress. If things remain relatively as they are now -- specifically, the GOP retains control of the Senate -- I think the likelihood of everything I've just been saying goes up. McConnel is drunk on power, right now, and already out of control. If Republicans retain control of the Senate, it will be like Palpatine declaring himself Emperor.
But if the GOP loses control of the Senate, especially if the loss is significant, we may be able to make it through all of this with a "minimum" of violence, whatever that means.

None of which is to mention that Trump is already calling for Biden to be assassinated and some of his followers, his cult, have already been taking that seriously. Because of course they do, and he wants them to.

So, yeah, that's where I am right now.
I really hope that you're in a better place than me, but I really don't see how we get through all of this without bloodshed. Maybe it was always going to be that way with where we are in the political cycle; I don't know. And I hope I'm wrong. I hope people (by "people," I mean Conservatives) regain their senses, but I think they've moved past that. When I see them posting things about Trump being god's chosen one, I can't get away from the fact that all of this has become a holy war for them. This is no longer politics; it's religion. It's disgusting.