Before I liked coffee, I would enjoy the occasional mocha, because, that way, I could go to the cafe with my wife, something she very much enjoyed. It was usually a once a week thing, a Sunday morning treat.

Yes, it was for my wife.
My wife had a strong desire for good morning coffee, something better than the instant coffee we had, so the espresso machine was so that I could make coffee, good coffee, for her every morning.
That was almost five years ago.

Of course, the best possible time for the machine to break is during a pandemic, right? And the best time during the pandemic for that to happen is when I'm sick with the pandemic disease. So that's what happened. I was making coffee -- because one must still have coffee when one is sick, unless one is unconscious -- and the machine made a popping sound and water started coming out of it from every place it could except the place it was supposed to come out.
Well, shit.

Fortunately, we did have some instant coffee on hand so coffee still happened. If you can call it coffee.

Look, I don't get a caffeine hit so, for me, it's all about the flavor, and instant just didn't... Well, it wasn't the same is all I can say. Replacing the espresso machine became a priority.

What we discovered is that espresso machines had gone up in price considerably. The machine that had so recently departed from us cost us only $150. It was a good machine, even if mostly manual, and I had come to love it. I made great coffee with it. But there was nothing comparable currently on the market. In trying to decide what kind of replacement to get and how much we should spend, we decided to figure out how much the dead machine had saved us: $30,000+!

Yeah, that was mind-blowing.

We decided that $500 wasn't too bad for a replacement. 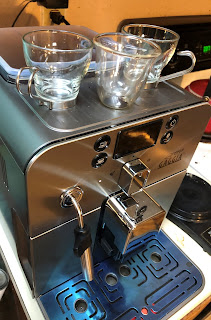 So we have a new espresso machine.
I'm not entirely satisfied with the coffee it makes, but it's virtually automatic. I have to put beans and water in it, but I don't have to grind anything anymore, and clean up is incredibly easy.
And, well, even if I don't like the coffee as much as what the old machine made, it's still so much better than anything that we would get at a cafe. Yeah, we really never go to cafes anymore, because the coffee I make at home is so much better. It still is.
I suppose I can't ask for much more than that.
Posted by Andrew Leon at 12:00 AM