Stranger in a Strange Land (a book review post) 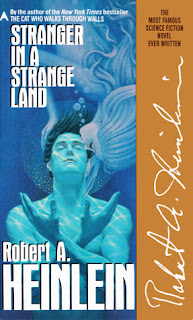 I feel like I'm a little late to the Heinlein game.
Which is silly.
But, for someone who grew up reading all the sci-fi/fantasy he could get his hands on, it makes me feel like I'm late.
What makes it silly, though, is that even if I'd read this when I was a teenager, I would have been reading it decades after it was originally published. Can you really be late to the game with fiction? Unless you're trying to be in on the cultural zeitgeist game, but that's a totally different thing.

At any rate, I'm not sure reading this when I was younger would have necessarily been a good idea. I was a pretty hard-line Fosterite all the way through my 20s. Oh, wait, I mean Southern Baptist. Not that Fosterite equals Southern Baptist specifically, but it certainly equates to any of the Evangelical denominations. Probably all the Protestant denominations. There's every chance I would have dismissed the book as blasphemous and been done with it.

Or, maybe, it would have helped to yank the stick out of my ass.
I guess we'll never know.
"Waiting is...," as Mike would say it, and I think I've read it at a fairly appropriate time in my life.

What I want to say about Stranger in a Strange Land is that it's barely science fiction, but that's not really true. To paraphrase Mary Doria Russell's response when her book, The Sparrow, was referred to as not really being sci-fi, "It has spaceships and aliens!" And so Stranger does have spaceships and aliens. But the sci-fi wrapper is to cover the philosophy underneath. Which is, actually, totally okay. Asimov said something about sci-fi being the perfect genre in which to write about anything.

Or, in this case, everything. Almost everything. It's a philosophy of... the world. A view of how things could be if we could just... get along? Love each other? His name is Valentine, after all. I don't want to be spoilery and say what kind of figure Michael Valentine Smith is, so I'll say, instead, that the first thing I thought of, the other first thing I thought of, was Billy Budd, Sailor. Billy Budd and Smith are very similar figures, at least in my vague memory of Billy Budd, which I haven't read in decades. Since most of you probably haven't even heard of Billy Budd, I'm not really spoiling anything, right?

But did I like it? I'm sure that's the question you're all dying to know the answer to, probably in some very human rushed sort of way, wanting me to get on with it. But that's not very Martian, you grok?

Yes, it's a very interesting and engrossing book.You can tell by how quickly this review is following after my last review. [And shut up to you people who are pointing out that it's been a full month since my last review! For me, especially recently, I flew through this book!] It's good. In fact, it's very good. I especially enjoyed the character of Jubal Harshaw; I suspect he's a personification of Heinlein himself, though I don't really know anything about Heinlein so that supposition could be completely baseless.

That said, the book does have a few issues, the first one being the way the lead female character is referred to by the male characters early in the book. They pretty regularly call her "little girl" or "baby girl," something which made me extremely uncomfortable. And, like I said, I'm completely unfamiliar with Heinlein, this being the first book I've read by him, so I don't know if this is a Heinlein issue or not. Or it could have been purposeful and for effect since the main male characters quit that behavior as they... well, as they become more evolved due to their experience with Smith. So is it an issue? I don't know, but I bet he wouldn't write it that way if he were writing it today.
Or would he..."

The real issue I have with the book, though minor, is a story issue. And this is what you could call mildly spoilery, so you've been warned.

Mike grew up on Mars. On Mars, dead Martians hang around after they're dead and, really, control everything. They're the Old Ones and are considered all-wise. But, when your soul gets to hang around for... forever... I guess it gives you a different view on things. If you got to hang around after you died, wouldn't you want tell people what to do?

At some point early in the book, we get a snippet from the perspective of the Old Ones. Which was fine. That's part of the sci-fi. Martians aren't the same as humans. The issue is that Mike spends a good portion of the book wondering about the human "Old Ones" and how to get to talk to them, which is also fine... right up until we hit a point where Heinlein gives us some point-of-view from a dead human. That part just didn't work for me.

Heinlein spends a fair amount of time discussing, through Jubal, how it is that we can't actually know the truth about religion, especially in a world where everyone insists that they know the one and only truth. That he later breaks that wall by giving us a view of what happens after death, at least from his perspective, undermines his point about that sort of truth being relative. Fortunately, there's not a lot of that in the book, because that would have had the potential of ruining the story.

All of that to say, if you're a sci-fi fan and pretty flexible minded, you'll probably enjoy this book. If you're not a sci-fi fan but, still, pretty flexible minded, i.e., you enjoy hypothesizing about the state of the world, you'll probably enjoy this book. If you're ultra-religious or think you have everything figured out, unless you have happened to figure everything out in the same manner as Jubal, you're going to want to throw the book against the wall and burn it. Or, maybe, it will help you get the stick out of your ass.
Posted by Andrew Leon at 12:00 AM