Jon Clinch would have you believe that he is the best writer that you've never read. And, well, maybe, he is, but I don't know, because I've never read any of his fiction. I'm not sure if I will, either. Here, let me start at the end:

Unmediated Ink: Notes from the self-publishing revolution ends with samples of all of Clinch's novels, 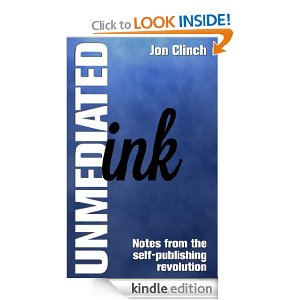 and, having read through them, I can't say that any of the books appealed to me in the slightest. And, see, I really want to want to read Finn, his debut novel. It got all kinds of praise (from literary critics) when it came out, has strong reviews, everything that says it ought to be a good read, but I started reading the sample and, not only was I not hooked, I was turned off by almost everything there, from the present tense of it to the skimpiness of it. And I don't mean the descriptions necessarily but the phrasing. All of the book samples struck me about the same. So, as much as I want to be a Clinch supporter (and I do, because I like what he stands for), I don't know if I ever will be.

Back to the beginning:
Clinch's first novel, Finn, was picked up with a six-figure advance. Yes, six figures, and Clinch reminds us of this several times in Ink. It was put on several best book lists of 2007 and up several awards. Maybe this is why Random House opted out of doing any real marketing of the book. After all, being on all of the those lists (all newspaper book critic lists) used to mean that people would read it, but newspapers don't carry the same weight today as they used to, and Finn under-performed.

Still, that didn't keep Clinch's second novel, Kings of the Earth, from getting picked up on another six-figure deal. Kings also received critical praise and was named the #1 book on the 2010 summer reading list in O, The Oprah Magazine. [There was a time when that slot would have meant an instant bestseller, but, maybe, that mess with Frey hurt more than I knew about.] And, again, maybe that's why Random House let the book flop around like a fish that has flipped out of its fish tank; the book didn't sell.

And Jon Clinch wasn't happy about it.

And I get that. His publisher failed him. I mean, they didn't even make the attempt to market the books. [Let me be clear, here, this is why he believes you've never read any of his books. Because his publisher failed to market them.] So he struck out on his own, self-publishing three more books including this one. He figured he could do better. Except I don't really know what that means. Is doing better selling more books (I don't know if he's done that.) or is doing better making more money (because I'm pretty sure he hassn't done that (it's hard to beat two six-figure book deals))? He fails to clarify or, even, offer the results. Unless he's still waiting for the results. At any rate, he seems to be much more satisfied with the amount of control he has now.

Ink is roughly divided into three sections: the problems with the big publishers, how he went about self-publishing his own books, and the samples of his novels.

Section one is the most interesting; the only problem is that Clinch just sort of skims from topic to topic like a stone across a pond. He mentions various things, but he offers no actual data or information about those topics beyond his own experience. Which is valid, but, then, with the two six-figure books deals he had, it comes off as kind of whiny. At least to me. Like the kid holding a double-scoop ice cream cone stomping his feet and saying, "But, Daddy, I wanted three scoops!" The only exception he makes to this is when he talks about Mary Doria Russell and what Random House did to her over Doc (yes, you should go read that post). That's his one concrete piece of evidence about what he's talking about other than saying things like, "this stuff is happening to all kinds of authors." And it's not that I don't believe him, but it would have been nice to have seen something more concrete. To put it in scientific terms, he offered up a hypothesis without any experimental data.

The second section follows his process of self-publishing. I would like to say it's worth grabbing up just for this stuff, but, unfortunately, it's not. There are three things that keep the section from being useful: 1. the aforementioned six-figure book deals and the plenty of money to do whatever he wanted to do (as opposed to most self-published authors who have budgets that amount in the hundreds of dollars if they have a budget at all) 2. the fact that he already had a relationship with many bookstores due to the aforementioned books 3. his background in marketing and advertising. He was just able to do a lot of things that, probably, 99% of authors who are self-publishing will not be able to replicate. So, whereas it's interesting to see the path he chose, I can't say that it's useful.

He ends that section with some reflections about self-publishing and where it might be going, but, again, he doesn't go deep enough, just skims the topics. And, having experienced both traditional and self publishing, he offers no evaluation. The closest we can get to how he thinks the two compare is that he seems to imply that he will continue down the self-publishing path, although he never states that explicitly.

The final portion of the book, as I stated, is a sampling of his four novels. These being here strike me as a marketing move, and it's probably a good one. Traditional publishers have long been putting samples in the backs of books. These samples do take up about 40% of the actual content of Ink, though, which already isn't long. And, well, if it was a marketing move, it's one that failed with me. Whereas, before I read the sample, I was planning to get Finn, I'm leaning away from that now.

All in all, I'd say Unmediated Ink is only worth the read if you want a superficial glance at one author's experiences in traditional publishing. It's not that I don't agree with him; I do. I agree with almost everything he says, especially the part about traditional publishers only being interested in the "next big thing," but, without the data to support his claims, the book is nothing more than anecdotal. And that's unfortunate, because a more in depth look at the issues plaguing the publishing industry, especially from someone who has seen both sides, is way past due.
Posted by Andrew Leon at 9:47 PM