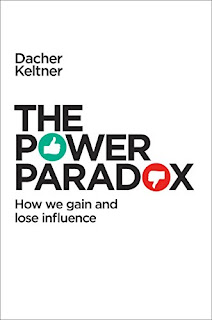 So... Power. What even is it? I think most people would say it's something about how able you are to tell other people what to do and have them do what you're saying and, while Keltner would probably agree with that, he would broaden the definition to include how able you are to make a difference in the world around you. Which, you know, is fine. I can go with that.

What I can't go with is Keltner ascribing the results of his small group experiments to the broader context of society.

So, yes, Keltner does have data, a lot of it, done mostly in labs (and colleges are labs, of a sort), mostly with small groups of people, and, frequently, with groups of people who didn't know each other prior to the experiment. And I can't argue with his results. I see how he came to the conclusions he came to within the contexts of the experiments he ran, but -- and it's a big BUT -- he applies his conclusions to society in general, and, no matter how I look at it, I can't see that any of his ideas, at least the ones dealing with how we gain power, apply to society at large and across other cultures (which don't necessarily have the same views toward power that we do). It's rather like Freud in his generalizing to all people the conclusions he came to from working with a select few of mostly women seeking him for psychological treatment.

Which is too bad, actually, because they are interesting ideas and conclusions.

To put it simply, Keltner believes that we give power to people who promote the greater good of the group. And that's all fine and good, but he also says we remove that power from people when they stop exercising their power for the good of the group and start exercising it for the good of themselves. And, well, I don't know if he's looked around lately, but there are an awful lot of people in power, exercising it for their own good only, who seem to be just fine where they are and in no danger of losing their power anytime soon, which is the weakness of the book.

Power, according to Keltner, is its own downfall, because it is the having of power which causes us to quit looking outward toward ways we can create the greater good and start looking inward to how we can create greatness for ourselves. And it's not that he doesn't get this stuff right, the things that having power causes -- I'm sure he is quite correct -- but he says it's giving into these power impulses that, then, cause us to lose the power we've acquired. That's the part I'm not seeing, these active dynamics he's talking about happening on a societal scale.

He talks about how power is a constant give and take, and he does demonstrate that on a small scale to some extent, but he never even touches on how or why the people in power who are demonstrably out for themselves are able to escape all of these natural punishments and consequences he says we have. It undermines his whole premise. The one thing he mentions that's kind of his out is that he says personal charisma is one of the biggest influencers on how we gain power, which, also undermines his theory of it having to do with contributing to the greater good, and he never talks about how it enables people to retain power after they've begun to abuse it.

The one part of the book he gets right, completely right -- and he gets it right because he deals with this aspect on a societal level -- is the section dealing with the effects of powerlessness on people. Having no power causes stress which leads to a further lack of ability to contribute to society (basically, the definition of power itself, according to Keltner) and poor health. He does nothing, however, to address the issue other than to say that these people need to be empowered.

I'm not going to say that the book doesn't contain some interesting ideas; it does. I will say that these ideas weren't ready to be a book, though. Even if he's onto something. And he might be onto something. But there's no way to apply what he says here to the world at large and no way to apply the principles he's come up with other than to say, "Be excellent to each other." Which, you know, is a great thing to say and something I agree with wholeheartedly, but he needs to offer some practical applications if he wants to write a book about it. Simply saying, "Be empathetic," isn't enough.
Posted by Andrew Leon at 12:00 AM