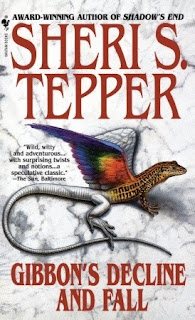 All right, this will probably be the last Tepper novel I do for a while. Not because I've grown tired of her books or anything but because I'm out of all the ones I have and I don't plan to go book buying any time soon. Not until I finish some of the other books I have sitting around. Or unless I decide I just need the sequel to Grass.

That said, overall, I didn't enjoy this one as much as her others, and I'm going to tell you why, which means, yes, there will be spoilers, so, if you plan on picking this one up, you may want to bypass this. Not that I think any of you are making that plan because, if you were, you would have picked up The Gate To Women's Country, which is something you should certainly do.

Let me give you some context:
The book was published in '96 and is set in '99. The coming millennium looms over the events of the novel though it actually has little to do with the action. When it came out, it was a contemporary novel, though the present that Tepper shows is a bit removed from ours. Chimpanzees, elephants, and many other species are extinct in the wild. Prisons are full of pods that they sentence people to sleep in. Far Right groups roam the streets... Wait, that doesn't sound too far off.

Basically, Right-wing groups of fanatics of every flavor around the world are making their presence known in violent ways, mostly against women but, really, against anyone who doesn't agree with them. They've taken over the politics in the United States and, really, everywhere else, too. People who do not belong to these groups have fewer and fewer places to turn for help.

The beginning third of the book actually felt very prescient.

The action of the book revolves around the disappearance of one of the women the book is about. At least, that's the only theme that carries all the way through the book as the conflict is rather fluid other than that. That's all stuff I'm not going to get into. Why spoil everything, right? The supernatural element that Tepper so likes plays into this, and it's ultimately what ruined the book for me. Or what it leads to, which is an actual deus ex machina ending.

Let's just say I'm not a fan of having a god step in at the end to save everything, especially when that god was a character in the novel beyond a mere spoken about concept.

However, the real problem area for me was the antagonist. In a general sense, the antagonist is "men" and their antipathy toward women, or, at least, their antipathy towards women's rights. The unifying factor among all of the far Right groups in the book is their belief that women should get back in the kitchen, so to speak. They should be no more than baby makers and food preparers and house cleaners. The book deals a lot with how shitty men can be and how they systemically undermine women and their potential roles in the world.

And we're all good as far as that goes, because all of that is true. However, Tepper then sabotages her point by having the main villain, Webster, be an interstellar entity that is causing men to be the way that they are. Well, maybe he doesn't cause it, but he exacerbates and intensifies it, so, really, except in a few cases, it's not really their fault.

This is a problem because the men she portrays in the book are not caricatures or exaggerations. They are exactly the way men are. But Tepper gives them, gives us, an out: Oh, really, men, they're not that bad; it's just all of these really bad outside influences that make them that way. I really don't understand why she chose to go that route. It pulls the teeth out of any social commentary she was trying to make.

Not to mention the unresolved nature of the denouement. Or, rather, the fact that the resolution is unrevealed to the reader. This is a tactic that would work if Tepper had left the reader with a question which the reader needed to answer for himself, but that's not the nature of it as none of the choices the protagonist is given are choices any of us can actually choose, so we're just left to wonder what choice she made and that's the end of it. It was... unsatisfying. And it left with the feeling that Tepper herself didn't know how she would choose so just left it hanging. Rather like the end of Inception where Nolan left the ending hanging because he didn't know which way to go with it.

So... yeah... brilliant beginning, but she failed to nail the landing. It's not a book I would recommend. Which isn't to say I didn't enjoy it -- it was certainly much better than many other books I've read -- but, again, I'd say go out and get a copy of The Gate To Women's Country.
Posted by Andrew Leon at 12:00 AM