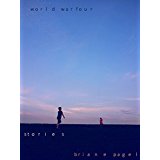 It's no secret that I'm a fan of Briane Pagel's work. He has a contemplative style of writing that really works for me. Generally speaking, his stories deal with some deeper question, some "what if?" that the story is addressing. So, like, in his excellent novel, Codes, the question is something like, "What if people were like computer "codes" that could be copied?" That's a good book, by the way, you should go read it.

Which is not to imply that most stories don't begin with some kind of "what if?" by the author, but Pagel's questions, or his answers, at least, tend to have a philosophical bent to them. So Codes is more about the effect on a person finding out he's a copy rather than a runaway adventure story about clones. I suppose it's the way he answers his questions that set him apart from most authors.

Which brings us to world war four, Pagel's most recent collection of short stories. I already tend to have a contentious relationship with short stories, and these are no different in that respect.

I think my main issue is that the two main stories (or what felt like to me to be the two main stories), including the title story, "worldwarfour," felt incomplete to me. This is actually a very common response I have to short stories, that they're too short. Like there should have been more there but, for whatever reason, the author just didn't finish it or fill it out enough or got bored. Something. That's how I felt with "worldwarfour" and "if i'd been in charge of einstein's brain."

And, with both of those stories, I couldn't decide what they were about, what the question was that Pagel was exploring. That said, I did really like what was there of "worldwarfour." It felt very much like a -- I'm going to guess 10-year-old (because either I've forgotten or it was never said) -- boy wandering in the woods while playing a game with his friends. Pagel captured a stream-of-consciousness that really feels right. It's just that the story has no real conclusion, and I was left wondering if, maybe, some of the story got left out of the book.

The other three stories are good, but I wouldn't say they are great. "zanzibar" both feels complete and incomplete at the same time. Like the necessary story is there, but it's not fleshed out enough. Except that it is enough to tell the story it's telling, just probably doesn't answer the questions it will generate. Sometimes, I find this to be a very good quality in storytelling, but I wasn't quite satisfied with it here. (But, then, that might just be related to my general dissatisfaction with the world in general, right now. It's hard to say.)

"7 pigs" and "pete & repeat went out in a boat," I both quite liked, but they're... oh, I'll say that they're less serious stories, which isn't quite right, because they're not, but they're handled in a less serious manner, I suppose.

So what I would say here is this:
If you're a fan of Pagel's work, you should read this one. It doesn't require a huge time investment, and there is some good stuff in it. However, if you haven't read Pagel before, go get Codes; it's a better introduction to his work, and it's good stuff.
Posted by Andrew Leon at 12:00 AM